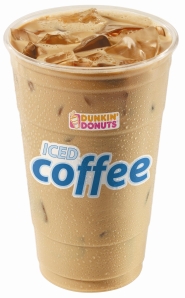 Even if you have to pay 3 dollars for this deal, it’s actually worth the cost since it tastes like heaven engulfed in your mouth.

I normally get vanilla iced lattes but i decided to be a rogue and tryied blueberry.  It was like having a Smurf in your mouth singing, ” La-la-la-la-la” but in a euphoric kind of way.

It’s great that the blueberry doesn’t overpower the coffee taste, however, it does leave a slight aftertaste.If you are a blueberry fanatic this will be fine.

If blueberry isn’t your thing Dunkin Donuts has an eclectic assortment of flavors such as:  Toasted almond, coconut, caramel, raspberry,  french vanilla and hazelnut.

I didn’t think Dunkin Donuts had the capability of  making a cheap coffee drink that trumps Starbucks, 7 Eleven and even Caribou Coffee’s iced lattes.

Dunkin Donuts staff also gives customers the option of  adding an infinite amount of  syrup and cream in any coffee base drink without a complaint– unlike  with your local Starbucks baristas who give you the “evil eye” when you ask for more.  Dunkin Donut’s syrup and cream is actually up to par in comparison to its competitors.

For only  two dollars customers can get a iced latte and a chocolated frosted donut, and leave with a smile plastered on their face like this : )