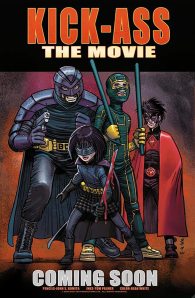 It’s been awhile since I was last hooked into a comic book- turned- movie, and during that time, I was studying like a fiend in college for my bachelors. Anyways, after graduation–I found “Kick-Ass”.

It really was Kick- Ass.

While I was cramming a scrumptious chocolate cupcake from the Barnes in Noble in Bethesda into my mouth, my friend Peter suggested we watch it. I was hesitant, a smidge, since the commercials were kinda hokey, but I’m glad I watched it.

Imagine if Kill Bill Volume 1 and 2 fell deeply in love with Zombieland? Well, 9 months later, I can see them giving birth to a healthy 9-pound Kick-Ass.

Nickolas Cage, as well as McLovin’ played vital roles in this movie as poser super heroes ( however, Cage is more hero- like since he ricochets bullets off bad guys chests), and they actually kept my interest, which is hard since I generally lose interest pretty fast in  most action movies.

I guess Hollywood’s new concoction for  action movie success is by following a comic book recipe in which they: dash a few cups of love, saute’ in some vengeance and heating enough gore and WTF moments that 2 hours can congeal.

It worked for me, the average movie goer, I hope it works for you.