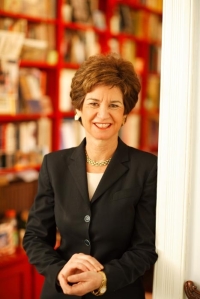 Martins Crosswinds  sparkled that night with Maryland Political figures from all ends of the spectrum.  Cocktail dresses, suits and even basic business attire was the popular choice for this years gala–but I chose a slightly different route.

I wanted to dress snazzy without spending snazzy so I purchased this magenta, sleeveless dress that ruffled below my neck (it was a delicious find for only $20 bucks at Tar-Jay).

For a chunk of the night, I was at the registration table.  I saw most of the major Md. Politicos, even Senator Barbara Mikulski who actually remembers me from  blogging about her Western Maryland Campaign Kick-Off travels.

I even had a  lovely  conversation with Governor Martin O’ Malley.

I knew I was going to see or even meet current Md. politicians but I didn’t think there would be a ‘blast from the past’ moment though.

Out through those doors, former Lt. Governor Kathleen Kennedy Townsend walks in, with a smattering of onlookers and fans hovering her. I was floored.

She wore a trim paisley green suit adorned with a  chunky necklace.  I was extremely nervous about meeting her, because, well, she’s a blast from my past as a young elementary school girl.

She was very friendly, and I will admit, that was my personal highlight of the night.  Of course, the speeches made by several congressman, Senator Ben Cardin and Governor Martin O’Malley raised people’s spirits before the up and coming elections, and the chicken was cooked just right.

But, I will never forget that moment when I was eye-to-eye with her because it was surely once in a life time.