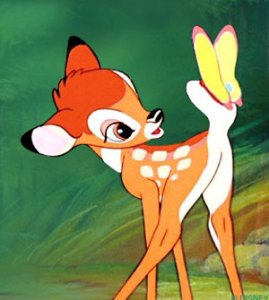 Two weeks ago, after finishing up some part-time work at the Barnes and Noble in Rockville, I decided to drive down Fairland  as a way to avoid snaky, camera provoking stretches of road.

According to my half-comatose GPS device, I was approximately .8 miles away from my house.  And as I was jamming my  foot  down the  gas pedal, Bambi’s mom stupidly walked past my car.

My heart constricted for a second, I thought for a nano second that  I was going to accidentally kill Bambi’s mommy so I  switched gears, and braked hard. Thankfully, his mom was only inches away from my car and only witnessed  naivete glaze through her eyes.

Unbeknowest to the deer, the jeep Cherokee beside me was mere seconds slower than I, and knowingly  rammed it’s face into Bambi’s moms head.

She catapulted, flipped a full  360 degrees in the air  and took a nose dive on some concrete. Her face was scraped to the side, and in spite of   it being bludgeoned, she got up and limply walked away. 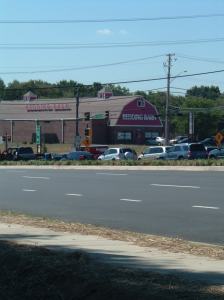 Since her face was partially grated on the concrete, I can only assume the only evidence left of that accident were a few red stained teeth.

Three days ago, I was driving back from a baby shower, and decided to take 29 South back to my house.  I thought it was my lucky day since traffic seemed non-existent.

My rickety GPS device alerted me that I only had 1.0 mile before I made a right turn unto my house, and I was overjoyed.

Before I was about to enter  my house,  I planned on reading 30 more pages into my  “Jane Eyre” novel and to call up an old friend for coffee. But instead, I partially wanted to nix plans when I was around .5 miles away from my house.

There were a line of cars  ahead of me, roaming slowly, as if an old, blind, woman with a cane was moseying across the highway. I switched to the next lane to see what all the raucous was about and sure enough, it was Bambi’s dad.

His back was snarled, his legs were twisted behind and he lost half his right hoof.  He used his snout and antlers to cross the street so he could rest in peace.

He inched slowly but lucky for him, the cars behind him halted and  allowed him to assume a new identity, after  he expired on a grassy patch to the side of the road: as road kill.

His face, as I last remembered it, was confused and tired. Maybe he’ll join Bambi’s mom in heaven, who knows?

Based on those two incidents, I know for sure what road kill looks like– to me anyways.

It looks like that that tearful expression Bambi had when he lost his parents.