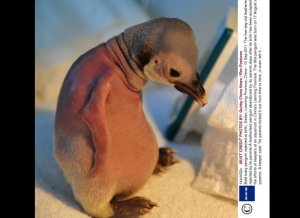 People can be cruel at times, this is common sense. There are stories saturating the media about parents abandoning, beating or emotionally abusing their young.  Nonetheless,It’s not everyday when readers get to hear about animal parents being just as cruel–if not worse.

This week, I read about a hairless penguin being rejected by its family due to looking socially and physically awkward. The penguin baby was  left to die, isolated, on a lonely patch of ice. Luckily for the baby penguin, that it was able to be  nursed back to health in China’s Laioning Province by caring non-animal hands.

This  little baby was born akward and bald because it lacked supple nutrition and had an inability to digest food properly. After the baby grew feathers and started to look the way a penguin ought to look, its family started to accepted it back, with open, floppy wings.

Another animal rejected this weak was this ginger seal (yes, the sad one you see above). Along the seal colony, by Tyuleniy Island, Russia, a furry seal with reddish fur and glossy blue eyes was hiding under a pile of logs. It’s family abandoned it too. The poor seal is almost blind and was left to die–much like the hairless penguin with crying eyes.

Generally seal are supposedly dark brown and, when wet, apear almost ebony. Which is  a stark contrast with our ginger seal who has glossy blue eyes and salmon colored flippers. I’m sure, when it’s wet, will look like an angry, rabie-bitten tom cat. It’s sad that it was considered an anomaly amongst its seal family. Poor lil bugger.

Lucky for him, the rejected ginger seal found a new home at a Dolphinarium where he can be doted on. Though both the baby penguin and seal found a happy ending to their sad situation, it pains me to think how animal families are not so different from many human families.

Just Looking into their long-set eyes, pointing downward, I couldn’t help but feel remorse for them and anger for their families. Just because they were born odd doesn’t make them any less a penguin or any less a seal. Only time will tell.