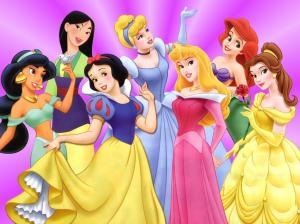 Disney has been marketing their Disney Princess franchise for well-over  past 10 years. Young girls ranging from new borns to pre-teens want to buy either an Arielle themed dress or  a Snow White doll.

Moreover, women my own age talk incessantly about their favorite disney princess growing up and about how they wish prince charming would just walk through their doors and whisk them away from their hum-drum lives.

I’m also sure that these same women, as younger women, would’ve wasted half their meager allowances on Sleeping Beauty merch if they could.

As lovely as it seems that young girls and older women love to color in conversation with droll tales of Belle being such a humble beauty who deserves the riches of being a new wife to the prince: It’s futile in rearing young women to be indepedent.

I,too, grew up on fanciful tales that all of your problems will wither away once prince charming strolls in, with his white horse and long sword, ready to fight all your battles and ready to beset you with riches beyond your feral imagination. I’m just fortunate enough to learn through life’s torrid experiences  that it’s not real. Disney movies are not real and MOST Disney princesses are the worst role models a parent can shove to their precocious young tykes.

I’m not really sorry to burst your niave little bubble nor will I recant anything I will say in this post. It’s true and I feel sorry for you for idolizing sleeping beauty. She’s a passive, insecure little whisp of a person. I’ve met young women like her and they waste their time focusing on their looks, dumbing themselves down by not reading books and focus all of their attentions on landing a rich man. Please!

Also, don’t get me started on Snow White. She, literally, ran away from her problems ( her step-mommy) and decided to bide her time with strange men ( dwarfs). Instead of teaching herself life skills or networking to get a career, she played passive house keeper and kept house.

She was a great role models for people pleasers ( she did please those dwarfs) and never frowned once. She smiled alot and never showed a variation of emotion throughout the movie. Is that really someone you want to look up to? A passive, people pleaser who can’t think for herself?

To top it all off, she did rely on her good looks to get saved by that prince. He only kissed her because she was hot. Not because of her intelligence, personality or special talents. She’s just a rich broad with a nice face. I guess snow white was the Paris Hilton of her day.

Ofcourse, Snow White ( like all the other Disney Princesses) and the prince marry,  live happily ever after,but does anyone ever talk about what happens afterwards? It’s great that the prince saved Snow White but the movie never explores his full personality.

Isn’t it true that men who play up the prince charming role tend to be controlling, passive aggressive abusers? Also, if Snow White really wants to keep her man–who fell head over heels for the way she looks–she may need to get lip, botox and a tummy tuck if she starts to age. If only Disney movies learned to “keep it real”.

This same rant holds merit to Cinderella. She’s passive and not a fighter. It’s obvious she hated her squalor but why didn’t she just move out? She’s married to the prince, but what else happens?

She tells other people to clean her mess? Cinderella just became a lazy “Real House Wife of New Jersey, New York, D.C, Los Angelas, etc.” That’s all she ever became after prince charming gave her back her Gucci brand glass slipper. A Real House Wife of Ever After Land, who gets to bitch and moan about Snow white talking trash about her and who smack talks Sleeping beauty for sleeping through her past conversation about too many mice in her castle. 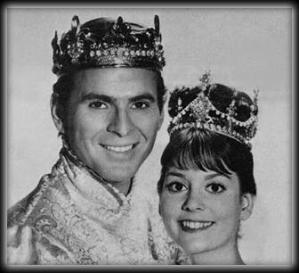 Now don’t get me started on Arielle. It may seem romantic to young girls that she ran away from home to be with her man, but she makes disobeying her family, being selfish and sacrificing her own special talents ( a lovely singing voice) to be with some random man. She’s one self-centered, insecure, little red-head. I doubt she ever said thank you to Sebastian or Flounder for sticking out for her either.

Belle, from “Beauty and the Beast” may have some redeeming qualities but still qualifies under being a terrible role model. It’s great that she looks past the beasts ugly exterior, and loves to read books. Yet, she doesn’t seem to do anything else but read books. She’s obedient to the beast and if you read the classic books, she pretty much does everything her selfish family members want without voicing an opinion for herself. Though I bashed Arielle for disobeying her parents, there is nothing wrong with having open communication.

Obviously, Belle didn’t want to stay with the beast but it would’ve been nice if Belle decided she didnt stay with the beast. Belle was subjugated by her family ( according to the classics) to not voice her own opinions and learned complete submission at a young age. That’s definitely not a virtue that should be passed on from young girl to older woman but a vice. It’s also quite trite that Disney Princesses have to be beautiful on the outside to be one. What about princesses who are beautiful on the inside? 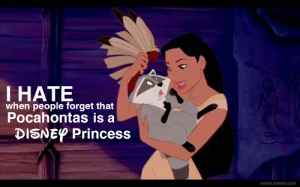 Princess Jasmin is beautiful on the inside and outside, but she was raised to be married off. Pocahontas was the same way. Their prime goal was to be married off. To sacrifice the rest of their lives to this union and to disregard their own talents. Inspite of those caveats, Jasmin and Pocahontas are ten times more redeemable than the aforementioned princesses. They are naturally beautiful, smart, courageous and bold. Not to mention, they try to make their own destiny.

Mulan is a fighter and a commoner. She worked very hard as a warrior and only lucked into being a princess, since that was never her sole aspiration. She deserves to be a role model as well as Princess  Tiana from the 2009 Disney movie “The Princess and the Frog”. Tiana never expected to be a princess. She simply worked two jobs, was self- sufficient, and dreamed of opening up her OWN restuarant with her OWN money. Out of all the princesses, she’s the best role model. She’s also realistically beautiful inside and out as well.

Though i’ve bashed countless princesses in this post, I have also praised the lesser known ones as well. I noticed that mainly the weak, passive or selfish princesses are marketed the most. I rarely see Jasmin, Pocahontas, Mulan or Tiana merchandise at any stores ( maybe some Jasmin but she’s ALWAYS in the background of her weaker, more passive, peers). Why is that?

Why market the worst role models a young woman can have, and stealthily hide the ones that should be followed?

If you agree or disagree with this post, please rant and rave below. I am all ears.