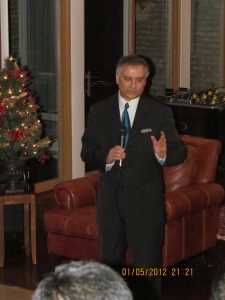 A few weekends ago, I had the privilege to attend a wonderful cocktail that embraces the good deeds that Majority House Leader Delegate Kumar Barve has been doing for not only Marylanders but for Indian Americans since 1991.

Prior to this event, Delegate Kumar Barve was one of several prominent officials who embarked on a six-day trade mission to India, spearheaded by Governor Martin O’Malley.

The November trip sparked strong business relationships between businesses in Hyderabad,  New Delhi and Mumbai and has also helped promote Maryland as a U.S. headquarters for Indian companies, especially  those in biotech and cyber security.

If it weren’t for this momentous trip, Maryland wouldn’t have this threshold  for International trade for our small and mid-sized businesses.

The trip to Hyderabad, was especially important to Delegate Barve,  as noted in his website:

“After a successful visit to Hyderabad, the trade mission spent some time in Mumbai before traveling to New Delhi, the Indian capital.  Traveling to Mumbai was a particular thrill for me.  As I previously mentioned, it was a century ago this year that my grandfather emigrated from the Mumbai-area and now I return as part of Governor Martin O’Malley’s historic trade delegation.

During our time in Mumbai, the delegation met with the Chief Minister of Maharashtra Prithviraj Chavan.  Governor O’Malley and Chief Minister Chavan agreed to work towards a sister state relationship between Maryland and Maharashtra.  Of all the states in India, Maharashtra has the largest gross domestic product and finalizing our sister state relationship will lay the groundwork for future trade and investment by both sides. 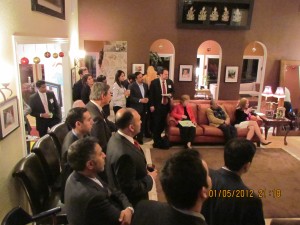 Aside from highlights about the  trip, Delegate Barve talked in great lengths about how far Indian Americans have succeeded in this nation pertaining to equality, success and education. It’s also important to mention that the  open dialogue between the doctors and the delegate spawned a lively conversation about Delegate  Barve’s aspirations for a better healthcare system that works with both doctors and patients.

The creme de la creme of night was when the delegate formally announce that he plans on running for comptroller in 2014. As soon as he announced his future candidacy, a sea of smiles emerged across the room. How could anyone not smile? The Delegate has had a very succesful track record as Majority House Leader, and has helped propell Maryland far amidst this biting recession.

Everyone was not only charmed by the news, but there was a united front for Delegate Barve’s candidacy that could only enlighten us all to a more auspiscious future, in 2014. 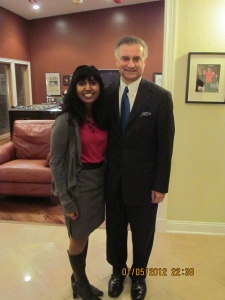