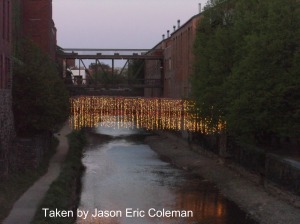 After having a fabulous brunch by Adams Morgan, Dennis, Youssef, and I met up with Jason around the Georgetown waterfront. It was a warm, sunny day full of families and bougie couples. Restaurants and shops were packed, nature was at its best and Georgetown was at its quintessential best. 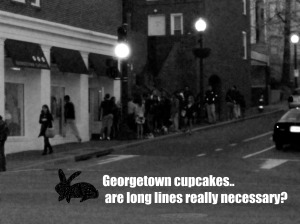 Besides the waterfront, we all trekked around the shopping districts and took as many snapshots of our day as possible. When we caught sight of ‘Georgetown Cupcakes’, we all were struck in abeyance and just gazed at the long cue lined up around the store.

I’ve been to the store located in Bethesda a few weeks ago and I did not witness a line this long.  I’ve had their cupcakes before too and they are just o-kay.  Sights like this corroborate my theory that hype can pull someone into anything.

Like, maybe even spending  $6 on something they can make better at their own homes for less than  the asking price.

Eventually we sauntered around the boating area and talked about future plans for the night. I had this mastermind plan to play this Easter Egg hunt likened to the movies “The Hunger Games”.  As I talked about it, I noticed a few askance glances, since it seems like such an odd thing to plan. Easter egg hunts are normally catered to little kids–never to grown-Ass-men.

After further explanation of my “grand scheme”, I noticed more accepting glances and smiles heading towards the thoughts of a mastermind competition.

Subsequently, we found this ‘hole in the wall’ hookah shop ensconced between two high-end clothing stores.

As we ambled in and deeply pondered why exactly all of these contraptions are in this store ( strange pipes, knives, and other arcane items); we were all dumbfounded by this particular hookah.

If  the movie “Alice in Wonderland” was based on real life, I could see the caterpillar smoking this king-sized hookah. It had like gazillian pipes, tubes and blah-blah-blahs.

Whomever created this baroque pipe must have previously made it for a Sultan in some oil- rich- nation since they paid keen detail to design, arrangement and structure. Sorry we couldn’t provide you with a clean picture since the owner of the store blighted us with threats if we did take a picture.

Also,  I want to give mad props to Jason. He took incredible pictures last weekend and was able to get enough light to illuminate scenic pictures, like the first picture you see in this entry.

After we left Aladdin’s hookah palace ( I say this in jest); we headed to “Dean and Deluca” so I could satiate my gourmet food curiosity. As you know, I am a gourmet food junkie and love to stop by shops that sell haute cuisine.

At first glance, we were all in awe with the size of the place. It’s huge.  Pastries, cheeses, entrees and even chocolate had it’s own corner. As a self-professed choc-a-holic, I moseyed on to the chocolate section and had a nice confab with the chocolatier.

I was especially amused by these frog-shaped-pieces due to the ample use of color used to highlight the chocolate’s contour, shape and smoothness.

The chocolatier said this european chocolate artist named all of his chocolate pieces after his ex-girlfriends. Exotic names like Tanya and Everly reminded me of that song by Lou Bega from the 1990’s, you know that song, “Mambo number 5”.

Some of the guys made a joke about the women’s personalities based on their chocolate description. One chocolate piece said it was nutty yet creamy, so the guys deduced she must have been bipolar.

Another chocolate piece was described as having a surprise center, so, ofcourse, she was either the one that got away or was a mysterious woman. We could go on and on about this, but I am sure you get the point. After leaving Dean and Deluca we walked back to our car.  Everyone was getting hyped about The Hunger Games version of a “traditional” Easter Egg Hunt.