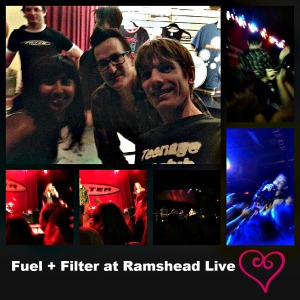 Brett Scallions was crooning some rendition of “Free Bird” by Lynyrd Skynrd and I can only assume I didn’t really miss much if that’s all he’s been doing. Performing an overly performed song for a restless crowd. As a short person, I was unhappy with the venue being packed with TALL middle-aged rockers. Lucky for me I found a spot by this nearly vacant aisle and was able to afford myself a fairly decent view of Fuel jamming to some of their greatest hits.

I was surprised to see Scallions performing since I thought they kicked him out of the band not so long ago. I’m glad the rest of the band realizes Scallion’s unequaled talents and charisma, for once. Scallions stringy hair, dirt-sodden shirt and raspy voice was well missed by all.

For 22$ I was able to see one of my all time favorite rock bands and after thinking about the cost, I was thinking about Fuel and even Filter’s heyday. There was a time when tickets would’ve cost between $40-200 bucks, but lucky for me, they are washed up.

I was able to pinch pennies since they are well passed their prime and lame artists like Lady Gaga, Justin Beiber and Rihanna reign today’s musical tastes.

Equally important is that Fuel was AMAZING! Scallions sung each song with heart, soul and verve. Despite him spitting random goo, every 2 minutes, his performance was flawless. I just wished he was more hands on with his fans.

Filter was the exact dichotomy of Fuel and I just wished both artists combined efforts more into yielding a better concert experience for all.  Filter was very hands-on but the lead singer’s voice was too throaty and hoarse for anything resembling music to even evoke some kind of emotion in me.

I was giving Filter a chance to whisk me away on a rock lullaby but was sadly left feeling vacuous inside after their performance.

I do give the lead singer of Filter brownie points for crowd surfing, heavily interacting with fans and with signing autographs at the end. I mean, how else is he going to maintain his fandom?