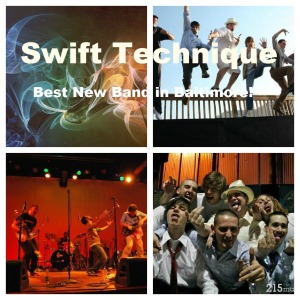 If you haven’t heard of Swift Technique before, than I pity you. It’s one the best bands to ever visit Fells Point! With a magical blend of funk, hip-hop and synchronized jazz beats, this up-and-coming band will surely blow your mind away. I recently interviewed the band and watched them live at the 8 x 10 club.

What made me love the band most was that they are deeply influenced by great Hip-Hop bands like the Wu-Tang clan.  In fact, they actually opened up for them in Philadelphia a few years back.

If you live in the D.C area, you will be able to catch them at the Wonderland Ball,  which is metro accessible and reputable for being the best chill-out place in the Columbia Heights area. They will be here, all month so don’t miss out.

If you live in Baltimore, catch them opening up for Big Sam’s Funky Nation ( from New Orleans) this coming Sunday, August 5th at the 8×10.  It’s one of those shows, that everyone in the area is going to be talking about.

If you want to learn more about this enigmatic band, tune into Sherryn Daniel’s blog  for an in-depth interview AND concert review in the near future.