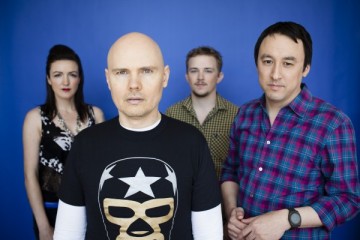 I’ve been an ardent fan of the band since the early 90’s. I guess it’s safe to assume that most of my childhood has been speckled with Smashing Pumpkins songs thanks to MTV. I was super excited to see this band in October but that show was postponed due to Hurricane Sandy.

Even though I had ( still have) the flu, I stuck it out and went to the show last Sunday at George Mason University in Fairfax, Va. Illness was not going to keep me away from this show. I was even fortunate enough to have these great seats by the side. Anticipation was thickening the concert arena and I couldn’t wait to see this pivotal group, from the 90’s alternative rock scene, play iconic singles from their deep body of work. 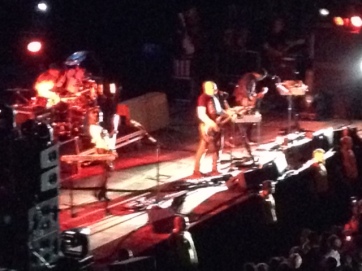 Before embarking on this show, I had no inkling that The Smashing Pumpkins was going to play their new album Oceania in its entirety for the first half of the show.  Albeit, the band did play their hearts out, and it was cool that they had this psychedelic- looking ball on top that displayed unique images. I guess  it was placed atop as a way to imbue strong emotions from songs  they were concocting.

Nonetheless, the album was  a faint, little, blip on my radar. An hour went by and my mind went elsewhere. I later funneled all of my energy into mastering this quirky ‘Learn Spanish’ app as a way to divert my attention.  Even though The Smashing Pumpkins were using video-mapping,i.e. the psychedelic-looking ball,  to create something novel yet unseen to the masses–the instrumentals, songs and overall performance was lackluster for me.

Oceania is miles away from the angst-biting lyrics from my heyday.  Lead singer, Billy Corgan, incessantly apologized to the crowd for being a happier person now. He said if he was angrier, his newer tracks would’ve had more verve, vim and veracity in it ( I am definitely assuming that he said that).

If you want narcoleptic lullabies, than buy Oceania. I couldn’t discern any of the songs since it all meshed into one, long, yawn-fest. After that  Oceania-induced purgatory ended, I was in a better place with the band.

The Smashing Pumpkins started pumping out their platinum, Grammy-winning, hits for the masses such as: Ava Adore, Tonight Tonight, Perfect, 1979, Bullet with Butterfly Wings, and a multitude of other tracks. A part of me wished I saw the band in the 90’s. I would have relished in Corgan’s angry tirades, broken guitar sessions and other sideshow behaviors. The end of the show had the proper trimmings of an awesome concert but the first half was very droll, indeed.