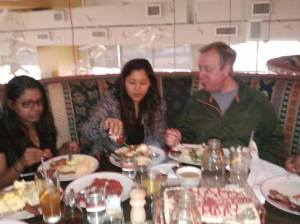 My birthday was memorable this year, to say the least. I had old and new friends drive all this way to Potomac, Maryland just to see me grace another year. I was fortunate that 34+ people even showed up, many who forgot to RSVP, but didn’t forget my special day. How lucky was I!

I was greeted by Muppet, princess, and cupcake balloons from my bf and a large, red, velvet cake from Harris Teeter. How thoughtful!

In spite of having a burgeoning guest list, and in spite of the fact that I only made an RSVP for 15 guests, Founding Farmers in Potomac rose to the occasion. Servers were amiable, food was made with great preparation, and guests felt welcomed. If it wasn’t for Founding Farmers, I wouldn’t have had the best birthday brunch—ever! 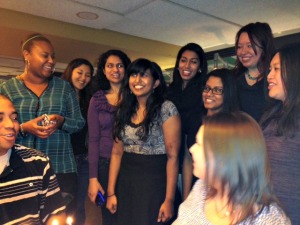 Half of my guests have never been to Founding Farmers, and the other half couldn’t stop raving about the place. Everyone instantly fell in love with the ambiance and, of course, the food. Popular side dishes for the day was the skillet honey butter cornbread, bacon wrapped dates, and the fried green tomatoes.

Amazingly delicious brunch items that most of my friends ordered were: Kentucky Burger Stew, South Carolina BBQ with Fixings, Boneless Ribeye, Macaroni & Cheese, Fried Chicken and Waffles, Founding Farmers Breakfast, Uncle Buck’s Beignets, and New Orleans Style French Toast. I ordered the french toast, and most of the people I sat with wanted to devour my plate. How deliciously rude!

The New Orleans french toasted was ravished by so many gluttons that day. It was crazy! One french toast, 9 mouths. And it was MY FRENCH TOAST that they devoured. Since it was my birthday, I absolve all the guilty offenders of this heinous crime. It can only mean that I must go back to Founding Farmers in Potomac to order some more.

Instead of a birthday bash, maybe a tea party (not the political one). Founding Farmers has an eclectic variety of teas ranging from: Jasmine Silver Needle, White Earl Grey, Chamomile with Lavender, and Chelsea Autumn Chai.

I can only imagine pairing these decadent teas with their vanilla bean cheesecake or, maybe with their red velvet cake. It’s so hard to choose from since you know that everything Founding Farmers has is made with the best ingredients, from scratch and with kind hands.

If you ever want to hang out with a cool bunch of girlfriends, go on a Sunday date or catch up with family, please go to the Founding Farmers in Potomac. This place is has everything you would ever need to have a memorable brunch experience.