I can’t believe the cast of “Roswell” is going to reunite at ATX Television Festival in Austin, Texas, this year from June 5-8. When the show premiered 15 years ago, many of us were love-lorned teenagers. This show resonated with fans due to the high-caliber writing, acting, and directing. This is just proof that Jason Katims has always been an exemplary executive producer.

One 0f my pet peeves about people who have never seen the show is that they claim it’s “nerdy” because aliens pose as teenagers. No, it’s not a nerdy show because none of the characters play D&D, wheeze, and wear pocket protectors. It’s more of an intergalactic romance brimming with angst. I wanted to get all of this out of the way before I let you all know that I will be attending.

I know that this will not happen again and as an ardent fan of the show (since day one) I have to be there. Aside from going to ATX this year, I have written a Roswell Travel Guide for Crashdown.com last year, visited Roswell, NM, interviewed both Brendan Fehr and author Melinda Metz for this website.

Yesterday, Brendan Fehr leaked on his Twitter page that there was a “Roswell” reunion underway comprised with Executive Producer Jason Katims, Shiri Appleby, himself and Nick Wechsler. Apparently, this was suppose to be a surprise and I could easily see why most pre-sale badges were getting sold out. Of course, I spent $500 on this and have a flight booked to Austin, Texas. Previously, I was going to use that cash on a romantic getaway to Vermont but this “rare” reunion deserved my attention. 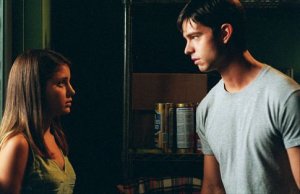 I am crossing fingers that Colin Hanks, Jason Behr, Majandra Delfino and William Sadler will come too. What’s “Roswell” without Alex, Max, Maria and Sheriff Valenti? Although I am a hardcore fan of the show, I really don’t want Katherine Heigl there. Back then, her prima donna antics watered down third season, and also created tension between Jason Behr and Shiri Appleby (in real life) since she dated Jason back then. That “tension” destroyed Max and Liz’s chemistry third season and compromised the romantic magic behind the show.

I am really glad that America knows what I knew back in 2001—-which is  that Katherine Heigl ruins everything. I am hoping she turns her nose up on this reunion and focuses all of her attention on “Jenny’s Wedding.” Moreover,  I also hope that I am not the only one who feels this way since I know other fans want this reunion to go without a hitch. Enough with this rant. It would also be great to meet with other “Roswell” fans and form new friendships on my trip.

What many people don’t realize is that lifelong friendships were formed because of this show, and I would know since that’s what happened to me. Some of my closest friends from High School still talk about the show and that says a lot.

This is random but did you know that Snooki’s favorite show of all time is “Roswell”? I know that doesn’t say alot since she is “Snooki” but I am hoping her star power will raise attention to this reunion. Snooki found out about this reunion via Twitter and I am betting on anything that she will be there.

Lastly, I will be reporting about the reunion, along with other ATX forums I visit too. Be on the look out for pictures, snarky stories and wtf moments since that’s what this blog is best known for.

Are any of you going to ATX this year? If so, who do you plan on seeing? Why?