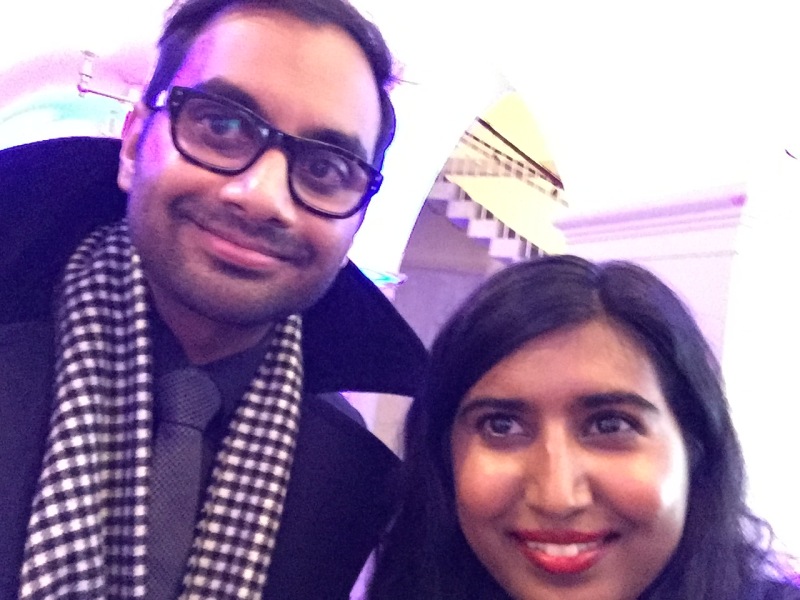 So on the same day that Biz Markie, C-list, Hip Hop Superstar, and beatboxing guru, “unfriended” me on Facebook, I attended the 2016 Smithsonian American Ingenuity Awards at the National Portrait Gallery. I was quite impressed with the roster of stars present at the red carpet that night.

Jeff Bezos, Amazon CEO and fifth richest person in the world ($66 billion net worth) won the Technology award because Blue Origin, the spaceflight company he founded, created the first rocket to ever launch into space, land on earth and launch into space another time . His contributions for the Space field are immense. Also, I thank Jeff Bezos and  Amazon.com every day for selling these amazing Korean face masks for half the price then what I find on other websites. This man deserves a heck of an applause from everyone.

Ok Go is an American rock band hailing from Chicago that is known for having the most quirkiest music videos. Ok Go was big in 2005 and have maintained their success by creating unique music videos. They revolutionized the art of music video making by incorporating difficult, synchronized, dances with catchy, delicious, beats. Ok Go’s low gravity music video was so well received that it snatched their inclusion in this year’s American Ingenuity Awards Show. Ten or so years ago I met the band at Virgin Festival and took a semi, socially awkward picture with the group. It was a costly picture since I had to pay for their newest album and then some. 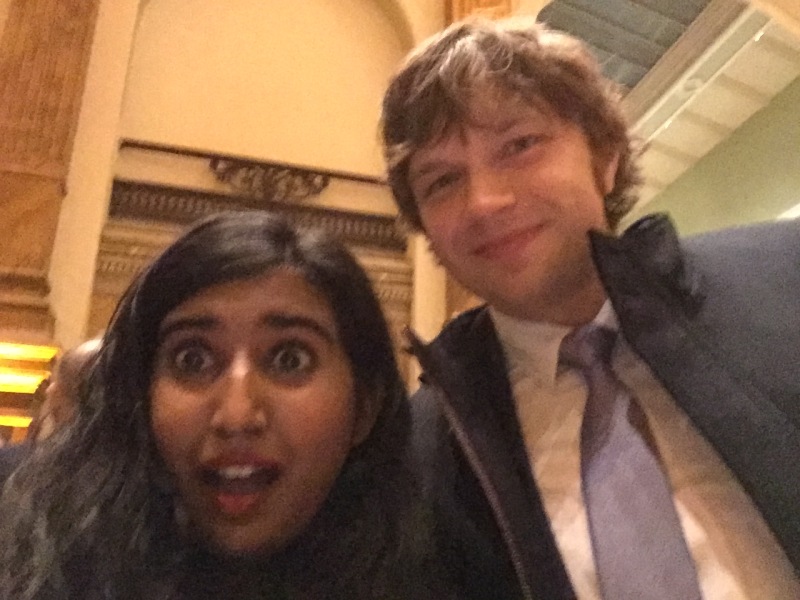 I didn’t know that several  years later I would meet the band, for free, at the red carpet. I was fortunate enough to take a free selfie with one of the band members at an exclusive cocktail party. I was clearly a star-struck fan (see picture above), I mean, this is Ok Go..

M. Night Shymalan, King of having a “twist” in his horror/thriller/campy/ fun movies, was a presenter at the award show. Growing up, I was happy to see his work on the movie screens and know that a fellow Indian American was paving a path for others to follow. If you really think about it, if it wasn’t for M.Night Shymalan and other Indian Americans before him, would the “Mindy Project” or even “Master of None” be possible? M. Night Shymalan paved the way so scores of South Asians (looking at you Priyanka Chopra) can make it big in Hollywood. Out of everyone I met, meeting M.Night and Aziz Ansari was the most meaningful to me. Despite the hurdles, backstabbing, and unpaved routes, they worked very hard to become A-listers in Hollywood. 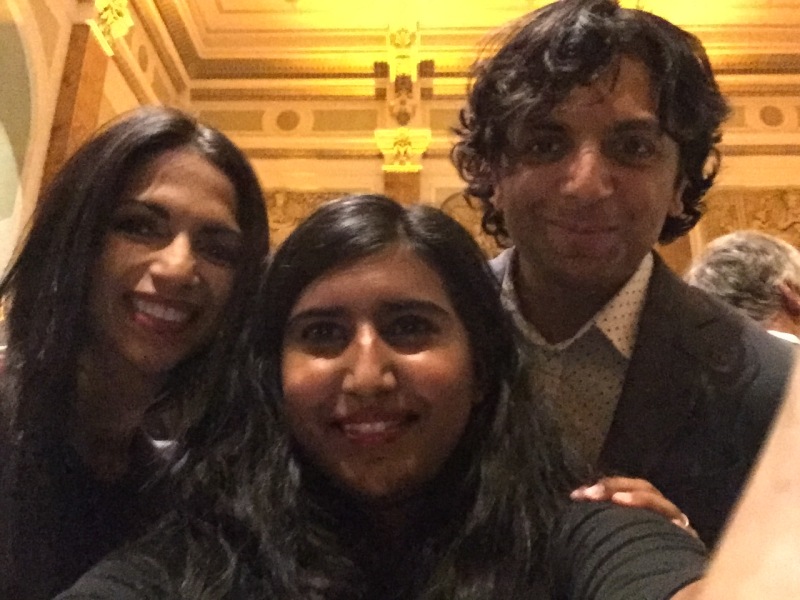 I had the privilege of meeting M.Night and his super sweet wife, Bavna, at the cocktail party. I was super nervous but Bavna helped me meet him. I thanked him for paving the way for other South Asian Americans to make it big in Hollywood and for being a maverick. No one else makes movies like he does. Did you know he’s also creating an animated series for Fox called “Eleven Little Indians“? Shymalan is teaming up with a writer from “Family Guy” to create this show about three branches of a large Indian family — one has achieved the American dream; another has just arrived in the U.S. wide-eyed; and the third has gone off the rails. I’m sure, I, as well as billions of little Indians across the globe, will be tuning in to see this show.

So I have a long, and sordid story about meeting Aziz Ansari, in the flesh. It’s not really long or sordid but when I replay those moments of meeting him in my head, they feel long and sordid.

I was by the red carpet, and after I saw Kyle McLachlan (Twin Peaks, David Lynch-centric actor) walk across, I turned around and saw Aziz Ansari with fellow “Master of None” co-creator Alan Yang. My eyes enlarged, mouth dropped, and I frantically pointed to him. Keep in mind he was in the other side of the room. Aziz turned away from Alan, and he enlarged his eyes (like Tommy Haverford from “Parks and Recreation”) and widely smiled at my direction. In his head, he was probably like “Oh my goodness, another person who looks just like me. What a rare occurrence.”

I was dumbfounded, star-struck, and every other synonym that goes along with that. Damn, it’s Aziz Ansari. The man behind “Master of None”, the same person I waited 3 hours for in the hot Tennessee sun (almost fainted from heat exhaustion) 4 years ago at Bonnaroo to see him perform his stand up. The same person I have consistently tweeted too, e-mailed about a possible blog interview(I was consistently rejected), and fan-girled about for the past 6 years was right there without any crazy fans (minus myself) around, fighting for his attention.

So I jumped in, introduced myself, shook his hand and right when I was about to go into a long diatribe about why my love for him is unlike another, his phone rang. In typical fashion, he answered, “It’s Aziz.” He apologized for the call but I moseyed my way towards Alan Yang, and thanked him, awkwardly, for helping to create a great show on Netflix. A part of me was paranoid that Alan checks his Twitter account and kind of knew who I was.

At this year’s Fancy Food Show, I consistently tagged Alan and Aziz videos of food demonstrations on Twitter. I knew Aziz was a hardcore foodie and I wanted him to experience what I was experience in New York City. I know I sound paranoid right now but, you never know in the digital age. I mean, Biz Markie, of all people, rejected me on Facebook so anything is possible these days.

When I talked to Aziz again, he was nice enough to let me take a selfie with him (see picture above article). I was shocked. He was super kind, down to earth, and genuine with me.

When Aziz walked the red carpet, he was joined with Alan for traditional red carpet pictures. He walked along to my left side and had a candid interview with The Washington Post about his career, family, and views on Trump. I was overhearing that conversation, like a creeper, and was enthused with his passionate responses, gesticulation, and his varied tones. I am positive that the fly on that wall Aziz was leaning on laughed so hard it died on the spot.

I didn’t drink any wine or alcohol that night so this story is legit if you are questioning any of this. So I lived out a big dream that fellow South Indians who love watching American TV could ever have. Bucket list item is officially crossed.

Towards the end of the night, I ambled into the private dining hall and had a conversation with two women who worked for the Ovation Channel (if you have Cable TV you will know who they are). Both of them had a conversation about Aziz that night and, clearly, they were obsessive fans too. One lady said she was looking for Aziz the whole night and couldn’t find him. The other complained that when she talked to Aziz, he said he was not taking any selfies with anyone tonight. I couldn’t hide my simper and decided to walk away. I guess I had a coveted selfie that night from Mr. Tommy Haverford, himself.